Please support Plasticity with some money (if you haven’t al­ready). Your money helps keep this site online. Thanks! —Tomasz

Please note that I am neither a physician nor a neuroscientist. I’m just a guy with enough skills to locate scientific papers, understand them and draw my own conclusions.

I designed Plasticity in the hopes that it would help my (pure-tone) tinnitus (see “Did you try it on yourself?” below). Although the app is based on reasonable scientific hypotheses, so far there is no conclusive evidence that it is effective in reducing tinnitus. Trials using similar methods have yielded mixed results, with less than 50% of patients reporting modest subjective reductions in pure-tone tinnitus. See below for scientific details.

Note that whatever scientific justification Plasticity has, it applies only to pure-tone and narrowband tinnitus. If your tinnitus is of the noise variety, there is no reason why Plasticity would help you and might even be harmful (one user reported a worsening of his tinnitus after a Plasticity session, which may or may not be a coincidence).

If you would like to give it a try, you should understand that you are taking part in an experiment and doing so at your own risk. Nobody knows whether your condition will improve at all, and — who knows — it might even get worse! I am putting this application out there because I think everyone should be able to give it a try if they want to. Plasticity costs nothing and does not require you to undergo a surgical procedure or put drugs in your body. All you need to do is play a pretty fun game for 10-30 minutes every day. Given the low cost, if one in five people get some tinnitus relief after training with Plasticity, I will consider it a huge success.

Whether Plasticity helps you or not, don’t forget to post a comment here and tell me how it went. Seriously, I’m waiting for people’s feedback.

How is it supposed to work?

As you get better at recognizing differences between sounds, your auditory cortex gets “re-wired”, changing your perception of tinnitus.

Why would that work? 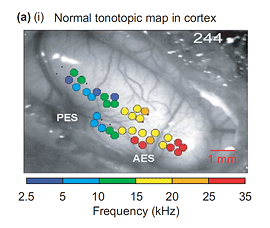 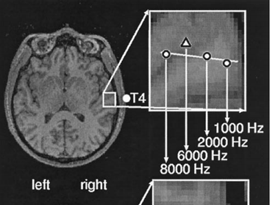 Tonotopic map for an example patient with tinnitus at 6000 Hz. Source: Mühlnickel et al., “Reorganization of auditory cortex in tinnitus”

Each of your brain’s hemispheres contains an area called the . The tonotopic map contains neurons which respond to different frequencies. These neurons are arranged by frequency: one end of the map corresponds to low frequencies, the other to high frequencies.

A 1998 study by Werner Mühlnickel et al. showed that the tonotopic maps in many tinnitus patients are distorted: the neurons that respond to the tinnitus frequency are located in a different place than neurons for that frequency in healthy patients. If tinnitus is caused or at least accompanied by changes in tonotopic maps, then it might be possible to alleviate it by reversing these changes.

One of the ways in which the tonotopic map can be reorganized is simple training. In a 1993 study by Recanzone et al., monkeys were trained to recognize small differences in the frequency of tones. After the training, the monkeys not only got much better at detecting frequency differences — their tonotopic maps also had more neurons corresponding to the trained frequencies. This effect was not observed in monkeys that simply listened to the same frequencies without trying to discriminate between them.

How do I use Plasticity?

Whatever strategy produces progress should work fine. If you are able to reach higher and higher levels, that means your brain is adapting to the task, which is the result we’re aiming for. Nevertheless, here are some “speculative suggestions”:

What settings should I use?

Did you try it on yourself?

Yep. I wrote Plasticity in April 2011 and started using it for about 20 minutes a day. My hope was that it would cure me completely. It didn’t. I thought I noticed some improvement, but that could have easily been simple placebo effect. After a month of using Plasticity, I went on a short foreign trip. During that trip, I noticed that I was able to fall asleep without masking noise for the first time since I got tinnitus. When I got back home, I decided to stop using masking at home as well. I also stopped using Plasticity. In the following months, my tinnitus gradually became a non-issue for me. I’ve gone weeks without noticing it. When I do notice it, it barely causes any reaction in me. I just go back to whatever I was doing and that’s that.

So if I wanted to sell you on the idea of using Plasticity, I could tell you that after a month of Plasticity, it became possible for me to fall asleep without masking. That would be true but misleading. The fact is, my condition had been improving prior to my experiment with Plasticity and it is possible that the improvement that came after my Plasticity training was a simple continuation of that trend. I have no way of knowing whether Plasticity contributed to my recovery. I’d say I’m about 50% sure that it did. It certainly made my brain better at recognizing pitch differences and by doing so, it might have altered the way I perceive the tone of my tinnitus.

Has this approach ever been tested in a scientific setting?

Yes. The general picture is that a few studies have shown some positive effects of tone discrimination training, but the results could have easily been due to placebo effect, as none of the studies were properly controlled for placebo effects and all of them relied on subjective tinnitus measures, such as asking the patient: do you feel your tinnitus has improved? Of course, it is also possible that the experiments actually worked, either by making the tinnitus quieter by inducing changes in the auditory cortex (which was the intended result) or making it less annoying through some as yet unknown mechanism.

Here is a good review of the efficacy of auditory training for tinnitus (note that it covers other training schemes in addition to the one used in Plasticity).

Here are my summaries of three studies that closely match the way Plasticity works:

Where can I find further information on tinnitus?

I’ve written a blog post titled “Tinnitus tips” in which I present some techniques that helped me get over my tinnitus. The post contains links to high-quality resources on tinnitus.

This document was written in January 2012 and updated in December 2014. For comments on Plasticity, please visit this blog post.